Since I was little, I already knew what Fugu is,  considering how I loved watching Animal Planet as well as Discovery Channel. The episodes I watched talked about the fugu which is otherwise known as the puffer fish or the blowfish, how the Japanese prepare the fish and how deadly it is when incorrectly prepared.

It has always been my dream to see the actual delicacy and try it! When I had fixed my plan to travel Japan, I immediately researched where in Osaka I will be able to taste this exquisite yet deadly fish. Then I read that there are quite a few restaurants in Dotonburi area that offer this kind of fish in their menu. All you have to know is that they have Puffer fish lanterns outside their establishment.

Immediately, after I arrived in Osaka, I went straight to Dotonburi in search for this. Well, it’s not that hard to find actually. When I was there, I think I saw at least 4 restaurants that sell this. By the way, this is what Fugu (blow fish) looks like:

I love food, and I am also adventurous when it comes to eating exotic dishes. So this one is absolutely one item on my bucket list of exotic delicacies to try.

Fugu contains a powerful neurotoxin that’s 1,200 times stronger than cyanide. There is currently no antidote for its poison. How’s that for adventurous?

If prepared incorrectly, symptoms from ingesting a lethal dose of fugu’s tetrodotoxin may include dizziness, exhaustion, headache, nausea, and difficulty breathing. Unable to speak nor move, the victim remains conscious until breathing stops and asphyxia begins.😉

The average fatality rate of fugu poisoning in Japan is roughly three deaths out of an average 49 annual poisoning cases, according to statistics. It’s a discerning number but I don’t think it’s too alarming considering that almost all of those deaths involved fishermen eating their own catch without the expert knowledge on how to prepare the fish.

With strict regulations mandating that chefs go through an extensive training program, restaurant goers have little to fear these days.

Well, at least that’s what I told myself.

Actually standing between 2 restaurants that specializes Fugu, I was memontarily unsure if I should try it. I just told myself, “The heck with this! I’m already here. I can’t back out now.” Then, I chose the one that offers a set Fugu Meal and went inside.

This is all or nothing.!

So, I ordered, anxious to taste it. When it arrived, it was beautifully presented. I had the Fugu Set meal which comprises of: Salmon Sashimi, Tuna Sashimi, Fugu Sashimi (which was expertly sliced), Fried Fugu, Fugu skin Salad, Fugu soup and a fragrant rice. This is how it looks:

I tasted the Fugu sashimi first. I don’t know if it was my severe anxiety that sunk in but I suddenly felt a numbing sensation in my legs, then came the sweating and a slight difficulty in breathing. It came to me that maybe these are the signs and symptoms of poisoning. I was more nervous now. Funny as it may seem but I started panicking . I began messaging my friends and family back home, telling them that whatever happens to me, it was all because of the fugu I ate. Hahahaha!

After which, it dawned to me that if something were to actually happen to me, it will be my loss since I would not be able finish my meal. Hahaha! So there, I ate the whole thing! I  took a deep breath. Slowly, the symptoms subsided. Hahaha! Maybe it was just anxiety. After all, I’m still alive,right? . LOL. 😅😅 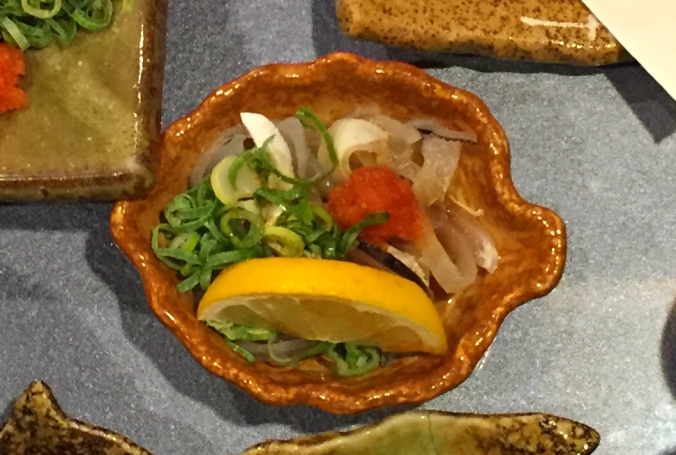 It is true: the fugu sashimi itself was close to near being tasteless. The fried fugu is crunchy and flavorful though. But then, it’s really not all about the taste. Sometimes it’s about the art of how it is tactfully prepared that gives a dish it’s appeal.

If someone asked me if I tried this, I’d say , “Been there done that. But… I would not dare to try it again!”. Bwahahaha. The feeling of uncertainty when I ate it was immeasurably out of this world. It was just as they say , ” When you eat Fugu, you get to play with death itself”.

It’s a once in a lifetime experience for me. Though it will not stop me from eating more exotic foods, I would not eat this one again! Maybe.😉

Name: I forgot to ask the name, but its the restaurant after Zuburaya which specializes in fugu but they don’t have the set meal that’s why I chose the latter.

2 thoughts on “Chinitoeats: Fugu – eating the world’s most poisonous fish”